Drop and Go zone by children

The “Drop and Go” Zone will be a zone where vehicles will stop to drop or collect schoolchildren. The zone will be just beside the street alongside footpath. The zone will be designed by using the participation of the students of the school (basically children in junior classes). This will be a place of amusement, as there will be some recreational features as well.

The BUET School, which is one of the case study sites, is situated just beside a main road of Dhaka. As such, the road poses a significant amount of risk to the school-going children, as there is no specified dropping zone, and thus, parents or guardians using both non-motorised and motorised vehicles make use of the road surface haphazardly to drop off their children. This poses a serious safety hazard, as the busy road is being used by high volume traffic and heavily loaded vehicles.

In the morning and in the afternoon when school starts or ends, a hump-shaped human barrier/jostle is created in front of the school gate, making the road strip narrower; sometimes more than half of the road width is taken up. Therefore, a specific purpose built place/zone for dropping-off/picking-up the students can be helpful to avoid this unwelcome jam and also can be a good solution to avoid safety hazards and thereby to provide a children-friendly road environment.

After examining the road environment during the school’s starting and closing times, some specific issues have emerged:

A drop and go zone would substantially improve the situation, as it would induce better regulated behaviour of the waiting guardians and would reduce the risks associated with the current chaotic conflicting situation. It is envisaged that the proposed intervention has the potential to provide a better school-front road environment for the children. However, there is a danger that this intervention could encourage more motorised travel at the expense of active travel. This could then have implications in terms of increased traffic and air pollution, particularly from engine idling. The scheme would need to be carefully designed and monitored to ensure this does not happen.

In order to ensure that the purpose of Metamorphosis Global of creating a better road environment for children is served, it is proposed that the zone is planned and designed by involving the children themselves and their guardians; this would make the use and self-enforcement of the facility more likely. In this regard, a mini-participatory workshop can be arranged in the school in order to collect opinions, and a drawing competition can also be organised among the students so as to get their choices and voices. The whole design and implementation of the drop and go zone, along with a safe pedestrian crossing, will be completed with the participation of the students. This non-physical painting related activity will essentially give the children and their guardians a sense of belonging and ownership of the intervention, which is very important for making the scheme self-enforced and successful. Children will also enjoy the task and more joyful involvement for making the road environment better.

In addition, there will be some temporary facilities to be set up on the footpath alongside the place for the waiting guardians. This may include a waiting shed for the guardians to provide weather protection, as well as a location that will allow them to socialise while waiting, thereby promoting a better sense of community.

For the successful implementation of this intervention, extended cooperation from the local authority would be needed, however, which may be challenging. 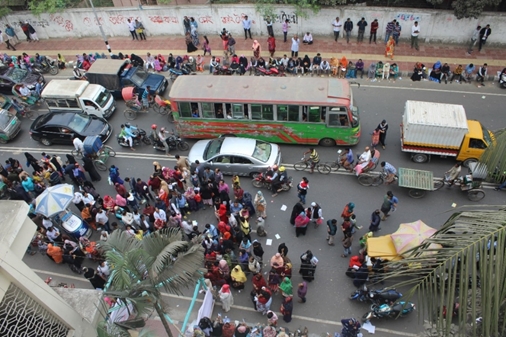 Even though this is a proposed scheme, the expected benefits include: