Launched by the local government, the asphalt of the highway N357 in Friesland, Netherlands, has a rumble strip pattern on it that plays the Frysian anthem when cars drive over it. As a vehicle accelerates, so does the melody. Similar initiatives can be employed to alert drivers of potential safety hazards in critical areas, such as schools.

In several countries schools are situated in close proximity to highways for easy accessibility.  However, this type of design of schools can lead to health hazards, as well as safety concerns, for the pupils, especially during peak times. Thus, the initiative of singing road idea, which was inspired by the rumble strips – a road safety feature to alert inattentive drivers of potential danger by causing a tactile vibration and audible rumbling transmitted through the wheels into the vehicle interior – can be utilised to make drivers aware of a school zone.

In the Netherlands, the government placed a pattern of rumble strips that plays the Frysian anthem when cars drive over it. The idea of this intervention of musical highways was to make people drive slower as the notes are only audible when passed at around 60 km/h and to warn drivers who veered onto the shoulder. In addition, Friesland is known for its own traditions and strong local cultural heritage. It is the only province in the Netherlands with two official languages, Dutch and Frisian. Moreover, the region’s capital, Leeuwarden, has been named a 2018 European Capital of Culture, so the intervention was also a part of a relevant cultural event. 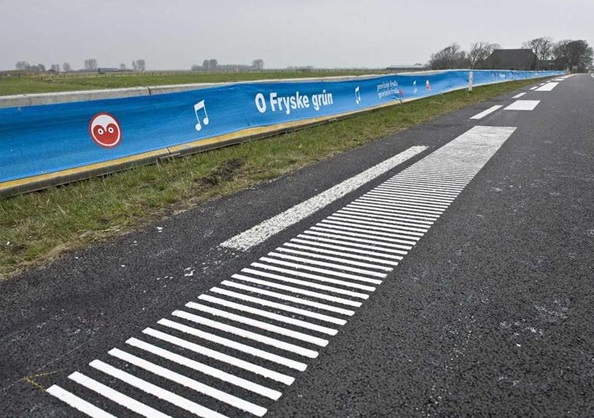 This intervention was part of a cultural event as well as to improve road safety using a novel and a creative idea to alert the drivers when they drive over the rumble strips. Given that it was implemented recently, no results have been made available, but expected benefits are likely to include a reduction in speed, as well as better alertness by drivers. On the other hand, a number of case studies comparing the outcome before and-after the introduction of rumble strips do show significant decreases in all types of severe injury crashes. For instance, study conducted to estimate the effects of centreline milled rumble strips on rural two-lane roads in Sweden found a reduction of about 20% in the number of fatalities and seriously injured people. Moreover, the study also found that up to 90% of the interviewed motorcyclists and commuters stated that the rumble strips would help improve traffic safety.

There are a few challenges associated with this initiative. In particular, noise at night can be an issue for local residents, and due to this reason, the government bureaucracy may prove to be a hurdle to the implementation of such schemes. On the other hand, the benefits of placing rumble strips near a school zone could be significant, as some drivers may miss the school warning sign, but they would not be able to avoid the rumble strips.