The aim of this intervention is to allow children to reclaim ownership of streets for outdoor activities and to allow them to interact at the neighbourhood level to increase urban children’s moderate-to vigorous-intensity physical activity (MVPA) and decrease sedentary time during vacations.

Children who live in an urban environment, and in particular in L/MICs, often lack facilities, such as playgrounds, green spaces and parks. A ‘Play Street’ or ‘Playing Out’, which temporarily shuts roads to traffic, is an effective way of increasing physical activity among children living in an urban environment. Play Streets now occur in many cities in around the world, with notable examples including London, Frankfurt and Vienna. Thus, these new strategies can be utilised to create supportive physical and social environments for children and promote active free-play in an urban region. Streets taking part in this scheme are closed to through traffic by volunteer wardens, enabling children to play safely and use the whole road, not just the pavement or sidewalk.

Playing out, which began as an initiative of local residents in Bristol in 2009, has grown into a national movement. Many London boroughs now allow local residents, who wish to apply for the scheme, to fill in an online application in order to shut their street to traffic for up to three hours a week, so children can play safely. In addition, the local authorities also provide residents with temporary traffic signs, barriers and cones required for the road closures free of charge after a successful application. Thus, it is a well-supported scheme by the local authorities, because if the children can get the physical activity, they can stay fit and healthy. 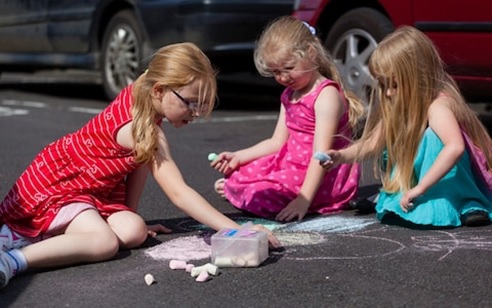 Schoolgirls play with chalk on the road (source: telegraph.co.uk)

The scheme has demonstrated high community engagement while offering opportunities for increased outdoor play in children. The intervention also showed a significant effect on the number of children meeting the daily pedometer-derived physical activity recommendations. In addition, children have expressed that without the scheme they would be indoors watching TV or eating pizza Thus, this type of intervention in an urban environment is highly beneficial to children’s health as well as for the communities.

This simple scheme is low-cost, scalable and potentially sustainable. Local residents can easily implement such schemes to take ownership of their streets and allow their children to play out in a safe environment. For parents, it is also an opportunity to make new friends as well as to develop a better-connected community.