A group of cycling enthusiasts deployed toilet plungers along an unprotected bike lane in Omaha’s Aksarben neighbourhood to make the street safer for cyclists. This initiative from the bottom-up approach can also be applied on roads near a school that do not have an elevated or protected footpath for pedestrians.

Public roads are shared spaces utilised by drivers of different types of vehicles alongside more vulnerable road users such as pedestrians, children and cyclists. Drivers have a responsibility to drive in a way that minimises risks posed to vulnerable road users. However, sometimes it can be difficult for the drivers to see the potential hazards or the risks to other road users in a chaotic scenario. For example, in low-to-medium income countries (L/MICs) most of the bazaars or open market place are situated near or on the highway. Furthermore, in L/MICs roads do not always have a raised footpath kerb to protect vulnerable road users.  Thus, using DIY equipment to protect other road users and to separate vehicles from cyclists and pedestrians can improve road safety.

Around the world, most cities continue to be dominated by cars but in a few cities, bicycles are slowly stepping into the mix as they are promoted by the city authorities.  However, according to a group of bicycle safety advocates in Omaha in Nebraska, USA, the city authorities are not doing enough to keep cyclists protected from vehicles in a busy street where there are frequent crashes. As a result, the group deployed toilet plungers with reflective tape wrapped around them onto the road. This bottom-up approach was utilised to illustrate that protected bicycle lanes would slow traffic and make the street safer for everyone. 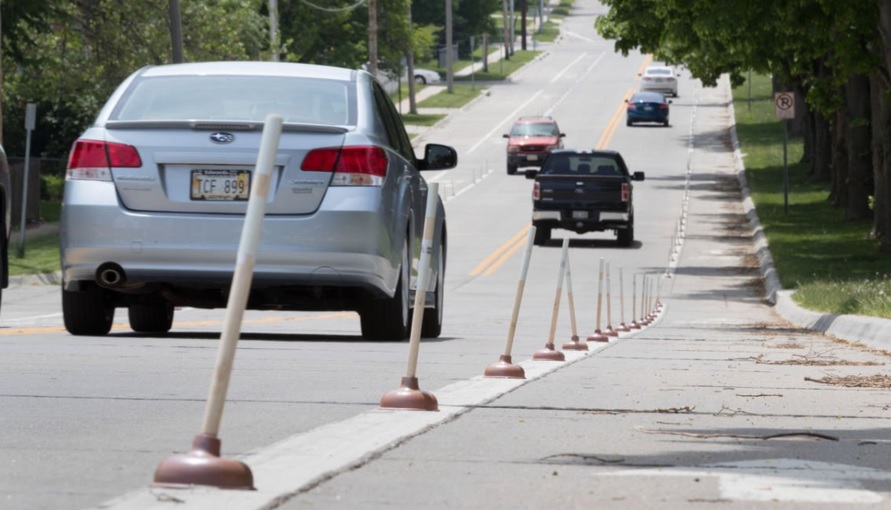 Toilet plungers appear to be the latest guerrilla trend in tactical urban planning to pay attention to safer roads. In the past, flower pots, planters and traffic cones have also been placed to create a safer environment for cyclists. The local authorities are now taking some of these pop-up safety measures more seriously and are replacing them with permanent posts in order to create segregated cycle lanes. Moreover, several case studies from research articles show that segregated cycle lanes improve the safety of cyclists as well as help to promote cycling in cities.

Pedestrian and cyclist crashes are a major road safety problem in developing countries. Footpaths or sidewalks can reduce crash risks by separating vehicles and pedestrians. Thus, this type of initiatives can be used to create a segregated temporary path for pedestrians, and particularly children, near schools situated adjacent to highways in L/MICs. Volunteers could deploy DIY materials just before the school starts and ends, and remove them when they are not required.  The overall benefits of this type of intervention are summarised below: